The faces of medievalism

Until recently the most downloaded file from my personal website was a photo of raindrops on a leaf of a smoketree,  from my old blog I had to shut down.

Among my articles I made available online the highest rank had the paper on anamnesis (2003, in Polish). Each year, around the liturgical feast of Corpus Christi my English study on its history in Poland is being downloaded more frequently. At the top of the list is now my English paper on medievalism  in theater history, after it has been introduced at the new website Medievalists.net in the collection „ARTICLES”, and announced by force of the Twitter.

Invited by this opportunity I want to announce a collective book in preparation whose working title is Oblicza mediewalizmu [The faces of medievalism], I am editing it just now together with Dr Maciej Michalski of the Adam Mickiewicz University of Poznań. He is the main author of the part of our introduction presented below. 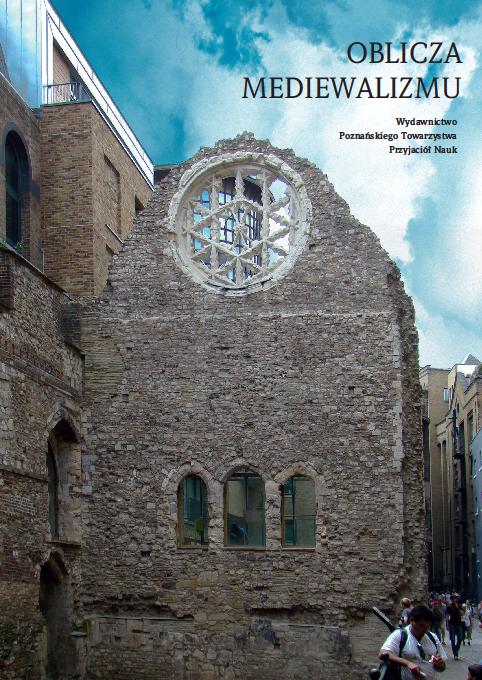 The book has originated from a special session at the 4th Congress of Polish Medievalists (19-21 Sept.2011), devoted to the „Reception of the Middle Ages in later epochs”. By including the topic into the program the organizing committee acknowledged the importance of developing apparatus and methodology of research in post-medieval phenomena traceable to the Middle Ages. Quite interestingly it was the students of modern times who delivered most papers, and even more contributed to this collective work without having participated at the Congress.

Introductory part of the book contains the present foreword and a general review by Lucyna Harc and Maciej Forycki, Kontynuacja, recepcja i ocena średniowiecza w myśli nowożytnej [Continuation, reception and assessment of the Middle Ages in modern thought]. It gives examples of three medievalist phenomena (uninterrupted, relict, renewed forms of existence), and sketches changes in the ways of perceiving and evaluating the medieval period between the 16th and 18th centuries; it was only in the time of Enlightenment that the Middle Ages became definitively separated as an epoch and negatively marked.

The main body of the book consists of nine texts, two devoted to the history of Polish literature of the 17th-19th centuries (starting with the Baroque: chapters by Mariusz Kazańczuk and by Dorota Gacka – and four to the period of the Romanticism: chapters by Maciej Michalski, Małgorzata Matusiak, Renata Majewska and Małgorzata Rygielska); last series are three chapters on other arts: architecture (Szczęsny Skibiński), pop-music (Adam Regiewicz), and the cinema (Irina Polets) – each represented by their works of the 20th century.

Mariusz Kazańczuk in the chapter Barokowy romans na kanwie średniowiecznej fabuły. O „Magielonie” Tomasza Nargielewicza [Baroque romance based on a medieval story. Around the “Magielona” by Tomasz Nargielewicz] presents the Polish adaptations of the late medieval French romance about Peter count of Provence and princess of Naples Maguelonne. The original work was created in the second part of the 15th c. at the court of the king of Naples, René d’Anjou. Its Polish version based on the German translation circulated from the early 16th until the end of the 19th century. Another adaptation in baroque style made a rebellious Dominican monk Tomasz Nargielewicz, who wrote down his religious poetry and secular romances during a three-years stay in order prison just before 1700.

Another work of the same author is object of the study of Dorota Gacka, Mediewalizm, prezentyzm – klucze do zrozumienia „Historyi o Ottonie” Tomasza Nargielewicza [Medievalism, presentism – keys to understanding of the „Historyja o Ottonie” by Tomasz Nargielewicz]. The romance is a quite free version of the French story Florent et Octavien updating the chanson de geste of the 14th c. to the baroque taste. In the course of this creative task the rather short source has been enriched with many imagined “medieval” features. Especially interesting among the amplifications are Polish motifs absent from the old source.

Maciej Michalski’s chapter O kilku sposobach przywoływania słowiańskiej przeszłości Polaków w pierwszej połowie XIX wieku [On some ways of referring to the Slavic past of Poles in the first half of the 19th c.] brings to our attention some constructions of Slavdom functioning in the beginning of the 19th century. We can see how the ideas of historiography and anthropology develop from the pre-romantic sentiments, often very far yet from the modern scholarly methods. This is the time of final divide between the traditional writing of history by presumably all-knowing poet (polyhistor) and the modern one reserved for professional scholars.

Małgorzata Matusiak’s Recepcja średniowiecza w powieści poetyckiej Adama Mickiewicza [Reception of the Middle Ages in romances by Adam Mickiewicz] looks at two long epic poems Grażyna () and Konrad Wallenrod () searching for the depiction of the period. In Grażyna we find an ossjanic perspective on the past that is falling apart. Konrad Wallenrod gives a picture of medieval Lithuania according to Mickiewicz’s concept of the past as a still active factor responsible for the construction of the present as well as of the future.

Another dimension of romantic medievalism shows the chapter by Renata Majewska, Językowe związki „Lilli Wenedy” Juliusza Słowackiego ze skaldycznym poematem „Krákumál” [Liguistic links of Juliusz Słowacki’s “Lilla Weneda” with the skaldic poem „Krákumál]. The Old-icelandic long poem was translated into Latin in the 17th c., and published again in 1808 and so could have been read by Słowacki who had a deep interest in Poland’s past. Echoes from the rich phraseology and traces of metaphors of Krákumál (in its Latin version) has been found.

The series of chapters on great Polish poets of the Romanticism ends with the younges of them, presented by Małgorzata Rygielska in Kontynuacja jako adaptacja. Średniowieczne wątki etnogenetyczne w twórczości Cypriana Kamila Norwida [Continuation as adaptation. Medieval ethnogenetic motifs in the work of Cyprian Kamil Norwid] puts in the center the question of poet’s understanding of the work of historian. She starts with the lyric poem Historyk [Historian], reflecting in a theoretical way on the differences between treatment of the past by history-writer (historyk) who only collects data and by “dziejopis”, real writer on the past who brings deep understanding of the data by showing their connections and discovering processes.

The second main part of the book consists of three papers on arts other than literature: architecture, music and cinema.

„Super fundamenta historiae spirituale extruere aedificium” (św. Hieronim). Powojenna regotyzacja katedr w Gnieźnie i Poznaniu [Re-gothicization of the cathedrals of Gniezno and Poznań after 1945] by Szczęsny Skibiński tells about a special case of renewing of medieval elements during the Gothic reconstruction of two cathedrals (Poznań and Gniezno, seats of oldest Polish dioceses) whose baroque forms were only partly destroyed in the last days of the WW2. The decision was made not to recover the last style of the building which would be practical and according to the science of restoring historical buildings, but to come back to their Gothic original forms. Here the communist ideology has met with the ecclesiastic standpoints. The state supported by archeologists and architects wanted to use the opportunity for extensive research into the beginnings of Poland, and to free them from baroque and German influences. But also the leaders of the catholic church wanted to restore the Gothic form as reviving the original catholic form of the oldest Polish cathedrals, after winning them back from Protestant German territory. Their re-Gothicization was successful in spite of a number of mistakes made during the long process of renovation.

Quite different problems and phenomena presents the chapter Sposoby uobecniania Średniowiecza w muzyce popularnej – przypadek rocka i heavy metalu [The ways of making the Middle Ages present in pop-music – the case of rock and heavy metal] by Adam Regiewicz. Medieval motifs are being used and reworked in texts of lyrics, even in musical compositions, and in the visual circumstances of performances and productions.

The last main chapter Medieval Elements in the Movies and their Allure of Unknown World by Irina Polets makes us aware of the strong position of film medium as provider of most effective tools of creating the image of the Middle Ages. The well researched study brings some order into typology of “medieval movies” (=movies about medieval topics), and shows the ways in which the audience is being influenced by the productions.

The additional final chapter of the book Jak uczyć o Średniowieczu w czasach popkultury? O możliwościach edukacji wobec wyzwań płynnej nowoczesności [How to teach the Middle Ages in times of pop-culture? About the possibilities of education confronted with the challenges of fluent modernity] by Adam Regiewicz is addressed to teachers or those who are reflecting on the future of historical education, which bothers many scholars and parents all over the world. The Author, here as experienced high school and college teacher brings us closer to the pedagogical discussions of the problem, and sketches a range of practical opportunities for teachers working with students formed by the Internet and the dominance of pop-culture.

5 odpowiedzi na „The faces of medievalism”

Anything and Everything, but mostly Poetry

I love food. I could spend all day thinking about, talking about and preparing food. Most of all, I love sharing food. Please vicariously enjoy my cooking!